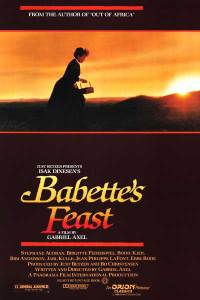 Earlier this week I finally watched Babette’s Feast, the Danish film that won the Academy Award for Best Foreign Language Film in 1987.  Directed by Gabriel Axel, Babette’s Feast is rich in Christian imagery, especially the surprising nature of grace.  More than anything else though, it was the eponymous meal of the film’s title and how it affected the feast’s guests that most captured my Christian imagination.

Babette is a French woman, a chef we later learn, who is exiled to a small village in 19th century Denmark.  She is taken in by two elderly sisters, daughters of a deceased and revered pastor, whose lives are spent caring for their father’s aging and dwindling congregation.  Babette’s days are spent cooking and keeping house while the sisters visit aged parishioners, reminding them of the pastor’s teachings and quelling the squabbles which come with increasing frequency.

The specifics of the Christian sect are left undefined in the film, but it is clear that these are a pious people who look forward to a better future in heaven.  They believe in – and sing frequently about – a God who provides but, as evidenced by the sister’s standard meal of bland soup, whose provision is mostly spiritual.  Babette eases into village life, though she never quite fits.  When word arrives from France that she has won a massive amount of money in the lottery the sisters sadly assume their housekeeper will return home.

Before leaving Babette requests the honor of cooking a French dinner commemorating the 100 year anniversary of the pastor’s birth.  After some initial misgivings the sisters agree.  Witnessing the amount of exotic food (and wine!) being brought into their small kitchen elevates their misgivings to grave concerns.  They confess to their church brethren that the virtuous celebration is turning into a worldly and possibly depraved party.  The usually contentious congregation reassures them that, no matter what happens, they will not enjoy this wickedness nor will they speak of it again.

The table has been set. 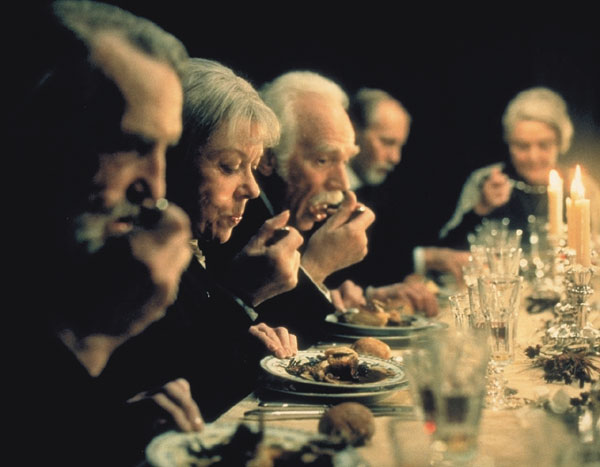 There is no way to accurately describe the opulent feast Babette prepares for the twelve men and women and men who gather in the sisters’ home; most have never seen, much less tasted, the food and drink set before them.  They cannot contain their pleasure.  Delighted glances are exchange even as they do their best to keep the conversation focused on their late pastor.  Course after elaborate course is placed before these faithful Christians, the extravagant presentation of each item a playful contrast to the somber dress and pious demeanor of the guests.

As the evening progresses it is clear the sisters’ fears were unfounded.  Rather than distracting their flock from their beliefs, this meal has made them more of what they claim to be.  Small reconciliations are made and laughter replaces petty disagreements.  Their conversation still honors their sect’s founder but is somehow more real than before dinner.  As they exit together into the chilly evening they clasp hands and sing another of their hymns, smiles on their faces as they see -really see – the majestic star-filled sky above.

In this encounter with embodied grace these religious people taste, touch, and smell the goodness of the God they’ve claimed to love.  For all of their hymns and Bible studies they had yet to know tangibly God’s love for them.  Their devotion has been one-way, directing prayers and discipline towards God without experiencing God’s grace manifest in the world around them.  Babette’s feast opens their eyes to this grace and they leave the table neither entitled to more nor shunning the possibility of future feasts.

Through her meal Babette shows her guests the beautiful ordinariness of savoring the gifts of God’s world such that faith increases in response to grace.