Richard Johnson and I are blogging our way through The New Jim Crow.  We’re rotating between chapters, posting reflections and the questions this important book is raising for us.  Check out our posts on chapters one, two, three, and four.  This is my final contribution; Richard will wrap things up with his thoughts on chapter six.
__________________________________ 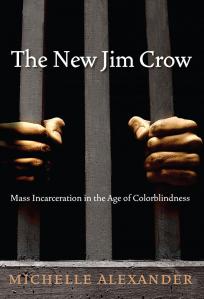 Borrowing the book’s title, chapter five provides a helpful overview of Michelle Alexander’s central argument – that mass incarceration today functions in a similar manner to the Jim Crow laws of a hundred years ago – while acknowledging the differences between the two systems.  In the author’s view, both systems are “structured to lock [those caught in the system] into a subordinate position.”  And it is African American men who, like their grandfathers, are disproportionately affected by Jim Crow’s latest iteration.

Alexander divides this insidious system into three parts: the roundup, formal control, and invisible punishment.  The roundup refers to the strange combination of laws that, as we’ve already seen, allows for massive racial profiling and disparity in the War on Drugs.  Formal conviction is the time drug offenders spend in prison which is more “than drug offenders anywhere else in the world.” Once released, ex-offenders face a series of laws that make reentering society incredibly difficult thus inflicting a secondary and invisible punishment.

Alexander chose my city, Chicago, to demonstrate how the system works.  Consider the following:

While these statistics may seem as dramatic as they are disheartening, Alexander proves  there is nothing new under the sun by showing the parallels with mass incarceration and  other forms of the “racial caste system.”  To take but one example, mass incarceration, like its predecessors, defines “the meaning and significance of race in America.”  Under slavery being black meant to be a slavery while Jim Crow defined blackness as the mark of second-class citizenship.  And what does it mean to be black (especially a black man) in America today?  Tune into the local news most any night and the answer becomes clear: to be black is to be a criminal.

The tragic case of Trayvon Martin’s recent death is but the latest example of how this plays out in real time.  For those who experience this story as an anomaly witness the response by some of the graduate and undergraduate students at Howard University in their video, Am I Suspicious? Here is a group of intelligent and ambitious young men who are very aware of the deficient and debilitating stereotypes they will face regardless of their degrees and accomplishments.

Michelle Alexander has convinced me.  Undoubtedly there is more to be said and nuances that will be made by other students of our racialized society.  But until someone can demonstrate a credible alternative to the massive racial disparities in the mass incarceration system I’m not sure we’re left with another option.  How do we respond?  How do people of my Christian conviction respond?  How do those of us who are, seemingly, unaffected by the system respond?