I read thirty books this year– not nearly as many as some of you, but respectable for me. A few were assigned by editors for review and some of these were lost on me, but for the most part I’d recommend my entire list to you. Still, each year I’m in the habit of picking five that are especially worth your attention. Here are this year’s five, in the order I read them. I’d be interested to know what you read in 2015 that is worth recommending.

Earlier this year I preached a series about friendship. This was something I’d wanted to do for a while but, each time I tried to prepare, found I had little Biblical imagination for the topic. I knew it was an important theme throughout Scripture – “I have called you friends.” (John 15:15) – but couldn’t recall reading or hearing anything theological on the topic. Hill’s book was not the only book about friendship I read, but it might have been the first and it began to make connections for me that I may have otherwise missed.

Hill, a theologian, writes as a “celibate gay Christian” who, over time, has come to see his sexual orientation as a gift for the church. This book seems to prove the point. While Spiritual Friendship will be encouraging to anyone committed to the traditional Christian sexual ethic, the book pushes far beyond sexuality to hold friendship up as a relational category worthy of our best efforts and thoughtfulness. The book’s title points back to a 12th century book by Aelred of Rievaulx who was one of the first to reflect theologically on friendship as a distinctly Christian way of relating to others. (I highly recommend this small book to you as well. Despite it’s age, the dialogical style and a helpful introduction make it relatively accessible.) Reading these books was something of a revelation to me, like uncovering long-forgotten wisdom. Within Christian subcultures that can idolize marriage and biological families, Hill reminds us that Christians have a much broader definition of family. And within this generous definition there is a special place for those individuals who love one another as friends. “If blood is thicker than water,” writes Hill, “then Eucharistic blood is thickest of all.”

One of the difficult and disorienting realities I notice in our city is that African American women and men are subject to violence in ways that are utterly foreign to most white people. There are the spectacularly tragic cases that make the news – Chicago police killed a college student and a 55-year-old woman the day after Christmas – and then there are the quieter, more common stories of friends and family members succumbing to violent ends.

Jesmyn Ward noticed this contagious violence when five young men – each from her small hometown in Mississippi – died within four years. These deaths included her brother’s, whose story weaves through her own as she traces their childhoods and adolescence through landscapes that are sometimes kind and often dangerously inhospitable. The book is a memoir, beautifully written, and so avoids sweeping conclusions about why Black and Brown people in this country are subject to such vague and persistent trauma. But Men We Reaped does better than give us statistics and explanations; here we have the beautiful and sad stories of three-dimensional people whose lives are no less meaningful for the wicked predictability of their untimely ends.

I’ve talked more about this book than any other this year. Earlier I wrote about how Between the World and Me and me reminded me of how James Baldwin wrote about the impotence of white Christianity. Coates has written a memoir, his second, in the form of a letter to his son. The book is consciously post-Ferguson, made more poignant as we see video-recorded police brutality through Coates’ adolescent son.

As an atheist Coates does at least two things masterfully that Christians should notice. The first is the priority of flesh and blood in these pages.

But all our phrasing—race relations, racial chasm, racial justice, racial profiling, white privilege, even white supremacy—serves to obscure that racism is a visceral experience, that it dislodges brains, blocks airways, rips muscle, extracts organs, cracks bones, breaks teeth. You must never look away from this. You must always remember that the sociology, the history, the economics, the graphs, the charts, the regressions all land, with great violence, upon the body.

There is no easy theorizing or theologizing here; Coates is relentless in reminding the reader that the natural end of racist violence is the destruction of individual bodies. Though Christians would theoretically want to add to Coates’ description of the body, the reality is that we have often said less. In our priority of spirit and soul, we are guilty of a particularly racist gnosticism.

The second thing Coates does is to tell the truth about Black bodies and the suffering they endure as if there were no white people reading. I’m not sure the author would put it this way, but there seems to be a purposefulness about how direct and honest he is. There are no escape routes for the good white person, only complicity. (In a group conversation about the book, a young African American man admitted his discomfort about how plainly Coates writes in a book that will be read by so many white people. I understand this to be intentional on the author’s part- an intentional ignoring of the inescapable white gaze.) As a Christian I’m forced to ask why Coates’ atheism seems a more stable platform for truth-telling than so many forms of American Christianity. I happen to believe that Christianity contains within it the resources for such piercing and courageous truth, but rediscovering these resources will necessarily begin with repentance which, not coincidentally, would be one of the appropriate responses to this beautiful book. 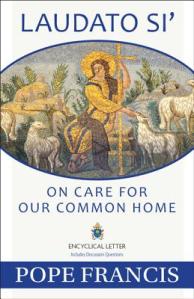 In this short book Pope Francis has made unmistakable something that should never have been debatable in the first place: care for the natural environment is a moral act, one that Christians are meant to have a natural affinity for.

Laudato Si is a uniquely Christian take on our environmental crisis. As such Pope Francis highlights things like humanity’s commonalities, the impact of climate change on the poor, the non-utilitarian nature of people, a realistic assessment of technology’s ability to solve environmental destruction, and an appreciation for how creation reflects aspects of God’s character. The book is gracious and pastoral but its greatest strength is making plain the distinctively Christian contributions to the environmental movement. There was a well of course sense as I read the book along with some sadness that the thoughtfulness and compassion exhibited by the pope isn’t always what Christians are known for when it comes to caring for our common home.

As with Ta-Nehisi Coates’ memoir, Claudia Rankine’s collection of poetry is intensely focuses on the particularities of Black and Brown bodies and experiences. The book’s heavy, glossy pages include occasional selections of art and various prose poems, many related to widely known moments of recent racial injustice. But the bulk of the book is given to stories, told to and arranged by the poet, of particular moment of racial dissonance and prejudice.

At the end of a brief phone conversation, you tell the manager you are speaking with that you will come by his office to sign the form. When you arrive and announce yourself, he blurts out, I didn’t know you were black!

I didn’t mean to say that, he then says.

You didn’t mean to say that aloud.

Your transaction goes swiftly after that.

I don’t read enough poetry to say much more about this book other than that it completely pulled me in. The poetic prose, artwork, and singular moments created an atmosphere that, from a variety of angles, asked the questions implied by the title: Who is a citizen in this country? Who decides? Is citizenship in America a goal worth pursuing?