The following is a guest post by Edith Cardenas-Michmerhuizen, a founding member of our church and one of the more thoughtful people I know. Here she reflects on her experience of Donald Trump’s ascendancy and destructive rhetoric.

I have watched the Republican primaries with concern. The man who I was convinced would go away by September, the man whose campaign I was certain would implode, is winning. Worse yet, he is winning by big margins. For the record, I am an immigrant and I am Mexican. Please forgive me if I take Trump’s words a little too personally but his presidential bid announcement speech set a displeasing tone for me:

While I am used to disagreeing with most conservative Christians in regards to politics, I sincerely thought that we could agree on this one. We could at least band together against Trump’s awful rhetoric. Perhaps because beyond my ethnicity, immigration status, and political persuasion, I am a Christian; I lived under the impression that the concept of being “brothers and sisters in Christ” meant something. I have been naïve. I know, “not all conservative Christians…” yet the truth remains that Donald Trump has carried states considered bastions of Christian conservatism. I have to wonder, when it comes to those Christians, am I really their sister? Have I been disowned? Am I so different from them that they have stopped recognizing me as their own?

We are to love one another. My head gets it, but my heart doesn’t. When a close family member tells me that Trump, “just speaks truth as he sees it and isn’t worried about being politically correct,” I am hurt. I want to say, “do you see me?” When my six-year-old child comes crying in the middle of the night because of a nightmare, a nightmare in which all Latinos in Chicago are rounded up and bombed, I hurt. Do you see me? Am I so frightening? When a mostly Latino basketball team is taunted by their opponents with chants of “Trump! Trump! Trump!” and a homeless Latino man is brutally assaulted by avowed Trump supporters, I can’t find any love in my heart. This is not a simple political disagreement. This is not simple hateful rhetoric. Trump’s hate found its way into words and his words have found way into harmful actions.

We are to love one another. My head gets it, but my heart doesn’t. The Mexicans. The Muslims. The refugees. We have faces. We are people. We have stories. We are not an abstraction.

I cannot find any love in my heart for Trump’s supporters. This is too personal and it hurts. I won’t say that I should not love them. I will just say that right now, I can’t. 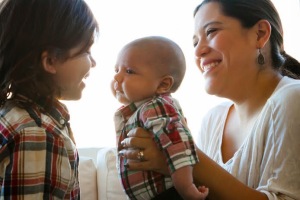 Edith Cardenas-Michmerhuizen is a paralegal specialized in immigration law, a follower of Jesus, and and a mother of two living in Chicago. She loves sharing her passion for Mexican culture, Spanish language and social justice with her two young sons.