On my way to meet a coworker for coffee I passed a flier taped to a light pole. The bright purple letters grabbed my eye: “BIGOTRY is NOT NORMAL.” I was running late but something about this apparently self-evident statement made me stop. The flier invited students from the nearby university to protest an event featuring the former campaign manager for the President of the United States. There are a few interesting things about this flier but my curiosity lies with its premise and, I assume, the rationale behind protesting the event in question. 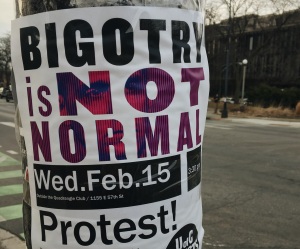 I assume that only those who have not themselves experienced bigotry, at least not regularly, would think of such predictable human prejudice as abnormal. A person who has been on the receiving end of a bigot’s hate is likely to come from a family or social group with a long memory of  what bigotry feels like, of the havoc in causes, and, importantly, of how invisible it seems to be among those who aren’t themselves experiencing this hate. I can’t imagine that this person – the one who knows bigotry firsthand – could claim with any conviction that bigotry is not normal.

I assume the people who conceived this pithy call to action have been exempt by virtue of race, gender, and class from the prejudices that are common in this country. Maybe I’m wrong in this assumption, but if not then it lines up with a trend I’ve noticed since the election. Among those who were strongly – morally, even – opposed to the president’s election there have been two general and divergent reactions. The first is shock, a kind of wrecked disbelief that this person could be elected to the nation’s highest office. The second reaction can be summarized by a friend who, despite her convictions about this man’s moral and political bankruptcy, told me that once the election results were clear she turned off the TV and slept like a baby. The first reaction is elicited from those who believed their nation to be something other than it revealed itself to be on election day. Those who were disappointed but unsurprised by the results have always seen this nation for what it was and is. They rolled their eyes and went to bed on election night. The first group had mostly avoided this nation’s bigotry; the second have long known it firsthand.

The assumptions behind the flier and the shocked response to the election share in common a tame estimation of evil. This optimistic view of the world assumes an unstoppable move toward the good and just, an arc that bends, however slowly, inevitably toward justice. Bigotry, for the optimists, simply cannot be normal and neither can this president. These must be anomalies along what is otherwise an upward trajectory to a more perfect union.

(I’m being overly general in my descriptions and hopefully not unfair, but I’ve had enough of these sorts of conversations since the election that I have some confidence in these observations.)

In Donald Trump’s America the optimism proclaimed by that campus flier seems utterly naive, until one considers the alternative. There is, I think, a new and personal fear that many of those shocked by the election are currently experiencing. Ironically, this fear shares an important similarity with that of many of the people who voted for the president out of fear for the country’s future: each believes in an America which is inherently good. For those who support the president the call was to make America great again. Those who oppose him often share this conviction; for them the country is already great because, as the Clinton campaign proclaimed, it is already good, and getting better all the time. Bigotry is not normal. For all of their differences, the opposing camps share in common optimistic convictions about the nation, convictions that must be strongly held regardless of alternative evidence. They are, both groups, Americans first. What, then, would it mean if America was not good? If, for the more conservative, it was not founded in a goodness worth reclaiming? And what, for liberals, would it mean if the nation did not bend unstoppably toward goodness? It would imply, I think, something painful about ourselves, something pressing about evil that we’d rather leave unexamined.

I write this during the Christian season of Lent. The beginning of these forty days of fasting and abstaining is marked by a somber service during which ashes are smeared on the foreheads of the congregants; we leave the service with dusty reminders of our mortality. “Remember,” the pastor says while applying the ashes, “you are dust, and to dust you shall return. Repent and believe the gospel.” More than once, glimpsing my reflection in a mirror, I’ve been shocked to stillness at the sight of that smudged cross on my forehead, an ancient countdown clock ticking relentlessly toward the hour of my death.

Remember and repent. I’m expected to look back over my sin, my complicity with evil while also looking ahead to my death. I’m dust and to dust I shall return.

In theory, this stark practice of remembrance and repentance should collide spectacularly with a culture that, at best, sanitizes the past, excuses our sins, and assumes the best about our intentions. Imagine, for example, a flier on that light pole which confessed: “Bigotry is normal and, what’s more, I’m a bigot.”

In his most recent book, Tears We Cannot Stop, Michael Eric Dyson writes that, “one of the great perks of being white in America is the capacity to forget at will.” His words, penned after the election, are directed toward the chronic amnesia intrinsic to whiteness when it comes to facts and history which threaten one’s view of this country- this good, possibly great, country.

That most white Americans cannot understand ourselves apart from this country’s definition means that we apply our forgetfulness not only to the nation, but to ourselves as well. We become, in James Baldwin’s words in The Fire Next Time, “the innocents.” He writes to his young nephew:

Now, my dear namesake, these innocent and well-meaning people, your countrymen, have caused you to be born under conditions not very far removed from those described for us by Charles Dickens in the London of more than a hundred years ago. (I hear the chorus of the innocents screaming, “No! This is not true! How bitter you are!” – but I am writing this letter to you, to try to tell you something about how to handle them, for most of them do not yet really know that you exist.)

The innocence, in Baldwin’s precise description, scatters its malevolence: the damage is heaped upon the women and men who exist outside the bounds of whiteness, and yet those wounded bodies will not be seen or believed because, well, whiteness is innocence. Still, the facts remain and the wounds and bruises betray our protests, our appeals to our goodness. “It is not,” writes Baldwin, “permissible that the authors of devastation should also be innocent. It is the innocence which constitutes the crime.”

There is one lens through which I can view the campus flier as resonant with the facts as Dyson and Baldwin express them, though I doubt it’s what the organizers had in mind. Christian people will say that bigotry shouldn’t be normal and, one day, won’t be. Hate was not present at creation nor will it cloud the new creation.

I expect, though, that both the make-America-great-again and the bigotry-is-not-normal crowds would ignore my lens for its painfully confessional nature. Because to say that bigotry was not God’s plan and will not be God’s future is also to say that it is our present experience, to which some of us contribute mightily, from the essence of our identities, despite whatever white noise of innocence has stopped up our ears. Through this lens America’s past greatness fades into something more ugly and complicated, the presidential administration’s bigotry is not dissimilar to my own prejudices, and the facade of innocence crumbles to reveal my complicity.

It’s one thing to have those cruciform ashes pressed onto my forehead once each year; it’s something else completely to look each day into a mirror and onto a country and know that our innocence was lost long ago.

I’ve unspooled too much from that one flier and, honestly, I’m heartened to realize that bigotry, even when supported by the presidential office, will be identified and opposed by some. We can gladly say that, at the very least, the organizers of that protest were motivated to action by their optimistic view of the world. And what of my critique? Does this darker interpretation of our nation and its motives not lead to passivity, toward pious quietism or selfish isolation?

In a letter to his son, Ta-Nehisi Coates urges him to,

resist the common urge toward the comforting narrative of divine law, toward fairy tales that imply some irrepressible justice. The enslaved were not bricks in your road, and their lives were not chapters in your redemptive history. They were people turned to fuel for the American machine. Enslavement was not destined to end, and it is wrong to claim our present circumstance—no matter how improved—as the redemption for the lives of people who never asked for the posthumous, untouchable glory of dying for their children. Our triumphs can never redeem this. Perhaps our triumphs are not even the point. Perhaps struggle is all we have. So you must wake up every morning knowing that no natural promise is unbreakable, least of all the promise of waking up at all. This is not despair. These are the preferences of the universe itself: verbs over nouns, actions over states, struggle over hope.

Struggle over hope. Elsewhere I’ve heard Coates say that struggle is hope. And while he roots this stark definition of hope in a world devoid of God, I believe he has articulated a Christian vision of hope, one that has been liberated from the countless unkept promises of American optimism. Accounting soberly for evil and hate need not freeze us in fear or keep us from just action. Opening my eyes wide to the creeping shadow in our land and in my soul is cause for righteous struggle, one that for Christians is oriented to God’s righteous future. Despite the reputation we have among many, Christians have at our disposal a wealth of spiritual resources that compel us to tell unsavory truths – about everything, ourselves included! – and remain happy warriors in the struggle for our neighbors’ good.

Bigotry is normal and it cannot only be those whose personhood makes them targets of it who say so. Perhaps this moment will be dramatic enough to cause us to shed our innocent optimism, consider the evil we’d previously discounted, and finally enter the hopeful struggle.

One thought on “Bigotry is Normal”