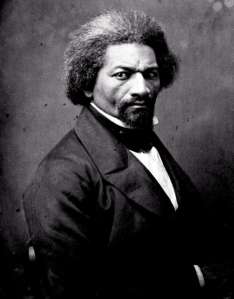 Independence Day is always a good day to re-read Frederick Douglass’ famous speech, “What to the Slave Is the Fourth of July?”, given to an abolitionist group that had gathered in Rochester on July 5, 1852 to commemorate the signing of the Declaration of Independence. Douglass – the former slave, abolitionist, and renowned orator – used his speech to draw attention to the absurdity of African Americans celebrating a holiday which did not include them in its nostalgia for independence. For him, America’s sins against slaves and former slaves were never more obvious than on the day the nation celebrated its freedoms. “Whether we turn to the declarations of the past, or to the professions of the present, the conduct of the nation seems equally hideous and revolting. America is false to the past, false to the present, and solemnly binds herself to be false to the future.”

In the very next paragraph the masterful orator anticipates his audience’s objections to his purposefully blunt language.

But I fancy I hear some one of my audience say, it is just in this circumstance that you and your brother abolitionists fail to make a favorable impression on the public mind. Would you argue more, and denounce less, would you persuade more, and rebuke less, your cause would be much more likely to succeed.

Douglass has identified a tendency that remains potent in 2018. He identifies – after, I imagine, having encountered it countless times among his white abolitionist allies – a reaction to his harsh language that demanded he shift his tone from denouncement to argument, from castigating his white audience to more gently helping them see the work that remained to be done.

This is the sort of thing that is common to hear today when advocates and activists precisely and directly oppose injustices perpetuated against, say, migrants and their children or, as is currently playing out here in Chicago, young victims of gun violence. Reacting to plainly spoken demands for justice, well-meaning people ask for more time, more understanding, even more empathy from those who are suffering. So, for example, those working for an equitable public school system that will serve all of its children are chastened that they must understand how bureaucracies and governments work and that, if they did, they would be more gentle with their critiques. In fact, these advocates, and the underserved families they represent, understand exactly how these institutions work since they’ve experienced firsthand how resources are consistently allocated for the privileged at the expense of those on the margins of the city’s power structures.

But Douglass will grant not a single inch to these kinds of banal requests: “I submit, where all is plain there is nothing to be argued.” He goes on to list a number of arguments his hearers might wish him make, arguments that are so plainly obvious that they are an offense to those Douglass represents. “What point in the anti-slavery creed would you have me argue? On what branch of the subject do the people of this country need light? Must I undertake to prove that the slave is a man?” And then: “Would you have me argue that man is entitled to liberty? that he is the rightful owner of his own body?” And then, with fire:

What, am I to argue that it is wrong to make men brutes, to rob them of their liberty, to work them without wages, to keep them ignorant of their relations to their fellow men, to beat them with sticks, to flay their flesh with the lash, to load their limbs with irons, to hunt them with dogs, to sell them at auction, to sunder their families, to knock out their teeth, to burn their flesh, to starve them into obedience and submission to their masters? Must I argue that a system thus marked with blood, and stained with pollution, is wrong?

The fundamental mistake that Douglass’ fellow-abolitionists consistently make is one that remains with us; they move the focus from the wrongs of the sufferer to the emotions and perspectives of the advocate. He’s sick of it!

What, then, remains to be argued? Is it that slavery is not divine; that God did not establish it; that our doctors of divinity are mistaken? There is blasphemy in the thought. That which is inhuman, cannot be divine! Who can reason on such a proposition? They that can, may; I cannot. The time for such argument is passed.

Those who are offended by unequivocal demands for justice would do well to remember that our offense is nothing compared to the outrage experienced by those who suffer injustice, outrage that is exacerbated by the entrenched reticence by those of us who have the capacity to right what is so obviously wrong. We are not the point. Our feelings are not the point. Our comfort is completely and totally besides the point!

What then, if not argument and persuasion? What tact did Douglass take a decade before the Civil War, when freedom for enslaved people was far from a foregone conclusion?

It’s not that Douglass chose fire over light as a way to vent his righteous anger. He believed, rightly I think, that convincing the comfortable was a battle without end. Beginning with the perspectives and concerns of the privileged meant never extending beyond the limits of extraordinarily limited imaginations. It would require constantly negotiating between delicate white sensibilities and bloodied black bodies. It was an immoral negotiation and one in which he was no longer willing to be implicated.

If they were to move forward into the battle with him, Douglass’ abolitionist friends and allies must leave behind their tender feelings and patriotic delusions for something more difficult, more honest, and, as Douglass concluded that day, more hopeful. Of course, to those of us steeped in the patriotic privileges of this unjust nation, this way will not feel hopeful. But that, in Douglass’ pursuit of lasting justice, was exactly the point.

One thought on “It is not light that is needed, but fire.”