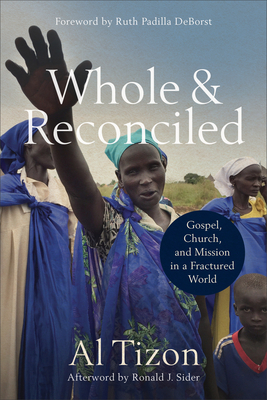 The realization of creation’s inclusion in God’s reconciliation project should disturb us, for we have done great violence to the earth and its inhabitants. By assaulting creation we have assaulted ourselves and thwarted God’s will for the world. Based on a fault theology of dominion, the church has helped to perpetuate the idea that the earth and its nonhuman inhabitants are primarily “natural resources” to satisfy humanity’s needs and fancies without caution or compassion. misinterpreting dominion as domination, broken humanity has cleared forests, blown off mountaintops, dumped waste in oceans, hunted animals for sport, created factory farms, and experimented cruelly on monkeys and rats. Such violent crimes against creation describe not just the distant past but the tragic present… I find humanity’s assault upon the earth and its fellow creatures nearly unbearable; the thought of the church participating and even sanctioning it pushes me right over the edge.

– Al Tizon in Whole and Reconciled. I won’t say much about this book now as I’m writing a review to be posted elsewhere, but Al’s wisdom is what the church urgently needs today. I was so impressed by how broad and holistic he could be – this passage comes in a section about reconciling with creation – while always remaining specific and applicable. I hope a whole bunch of American Christians and their pastors read this book carefully.

It is altogether probable that there is an executive of an air-polluting industry who has a beloved child who suffers from asthma caused by air pollution. In such a situation the Sympathetic Mind cries, “Stop! Change your life! Quit your job! At least try to discover the cause of the harm and do something about it!” And here the Rational Mind must either give way to the Sympathetic Mind, or it must recite the conventional excuse that is a confession of its failure: “There is nothing to be done. This is the way things are. It is inevitable.

In this essay Berry contrasts what he calls the Rational Mind and Sympathetic Mind. This fictional example of the differences between the two ways of engaging the world is notable for how it summarizes our typical responses to critical issues. When faced with evidence about climate change or racial segregation, to take two common and easily-accessed examples, we are commonly told – or tell ourselves – that there is nothing to be done.

This is a lie, of course. There are plenty of small and big things to be done about the decisions we make that inflict harm upon our neighbors and the land. But Berry’s Rational Mind does not allow room for the sort of blunt truth that leads to creative possibilities. So we are left living under delusions about our own inability to make changes, about the inevitability of inequity. Telling the hard but hopeful truth requires a different mindset, one that privileges relational proximity and compassion over the faceless systems which benefit from our passivity.

In our century of almost universal violence of humans against fellow humans and against our natural and cultural commonwealth, hypocrisy has been inescapable because our opposition to violence has been selective or merely fashionable. Some of us who approve of our monstrous military budget and our peacekeeping wars nonetheless deplore ‘domestic violence’ and think that our society can be pacified by ‘gun control.’ Some of us are against capital punishment but for abortion. Some of us are against abortion but for capital punishment. Most of us, whatever our stand on preserving the lives of the thoughtlessly conceived and born, thoughtlessly participate in and economy that steals from all of the unborn.

One does not have to know very much or think very far in order to see the moral absurdity upon which we have erected our sanctioned enterprises of violence. Abortion-as-birth-control is justified as a ‘right,’ which can establish itself only by denying all the rights of another person, which is the most primitive intent of warfare. Capital punishment sinks us all to the same level of primal belligerence, at which an act of violence is avenged by another act of violence. What the justifiers of these wrongs ignore is the fact – as well established by the history of feuds or the history of anger as by the history of war – that violence breeds violence. Acts of violence committed in ‘justice’ or in the affirmation of ‘rights’ or in the defense of ‘peace’ do not end violence. They prepare and justify its continuation.– Wendell Berry, “The Failure of War” in Citizenship Papers.

This, from Elizabeth Bruenning in the Washington Post about the Trump administration’s decision not to enforce the Migratory Bird Treaties Act, is so beautifully said and so profoundly sad.

They’re so easy to kill, birds; or rather, the power of human industry is so profound that only a little carelessness — the slightest abdication of that deeply human impulse to know and understand — is tremendously destructive for them. Perhaps this is why dead birds so often stand in literarily for human cruelty and corruption: Coleridge’s senselessly killed albatross in “The Rime of the Ancient Mariner,” for example, or the titular species of Harper Lee’s “To Kill a Mockingbird.”

But maybe that’s the heart of it, and maybe that’s the heart of the Trump era: permitting cruelty without consequence for the powerful. It’s harmful to the weak — birds, in this case, whose beauty needs no argument — but also to the strong who, in the exercise of cruelty, become less humane, less human. In the Gospel of Matthew, Jesus Christ tells His followers that not a single sparrow falls from the sky without God’s knowledge. Maybe this is why a person like Len Howard, with her deep and steadfast love of knowing her fellow creatures, seemed in some sense like St. Francis preaching to his birds, graced. But ours is not a graced age. So many more birds will die now, drowning in waste pits with greased feathers and electrocuted on power lines. We won’t even know.

For several years I lived in what seems to me now to have been a very general way. My major aim was to keep writing, and I had done so by taking advantage of random opportunities, traveling here and there, living a year or two in one place and a year or two in another. And then in the spring of 1964 I turned back on the direction I had been going. I returned to Kentucky, and within a year bought and moved onto a little farm in my native part of the state.

That return made me finally an exile from the ornamental Europeanism that still passes for culture with most Americans. What I had done caused my mind to be thrown back forcibly upon its sources: my home countryside, my own people and history. And for the first time I felt my nakedness. I realized that the culture I needed was not to be be found by visiting museums and libraries and auditoriums. It occurred to me that there was another measure for my life than the amount or event the quality of the writing I did; a man, I thought, must be judged by how willingly and meaningfully he can be present where he is, by how fully he can make himself at home in his part of the world. I began to want desperately to learn to belong to my place. The test, it seemed to me, would be how content I could become to remain in it, how independent I could be, there, of other places.

Here Berry is making the important connection between race and place. In a book about his own coming to terms with racism and its psychological and spiritual impact on all Americans, but especially white Americans, Berry finds that his own healing depends on his willingness to submit to place, to stop living, as he describes elsewhere, as “urban nomads.” The reasons for this connection are many and Berry gets at some of these, mostly related to culture and economics, but he misses what I consider to be most fundamental, that race was created as a means to sever people from place. As Willie Jennings has pointed out, by granting the pseudo-scientific construction of race the power to define bodies, European colonialists (and their descendants) detached themselves and those they sought to exploit from God’s creation. No longer was the earth itself – with its cultures and histories – the lens through which peoples were encountered and understood (or understood themselves), now the warped veneer of race could be conveniently applied to those whose labor and bodies were desirable for profit.

Deciding to reject “ornamental Europeanism” for a local life submitted to place did not immediately lead to wholeness for Berry, but it did expose his racial nakedness and from that honest place he began his journey toward a more humane life.