One way I know that it’s been a great reading year is by how hard it was to narrow the list of the books I’ve read in 2017 down to just these five. And I’ve left off some fantastic stuff, including The Color of Law which I’ve probably recommended more than any other this year but which I’ve already reviewed. Others worth your attention include The Pietist Option (review forthcoming at The Englewood Review of Books), Eight Years We Were in Power (a collection of, mostly, already published essays by Ta-Nehisi Coates but worth the read for the new introductions to each chapter and how it charts a particular experience of the Obama years), and The Tech-Wise Family by Andy Crouch (Maggie and I read it together and it’s provided loads of good conversation fodder for how we’d like our family to engage “easy everywhere” technology.). I’ve been reading deeply on housing segregation and policy (again, The Color of Law) and have learned a lot from Making the Second Ghetto by Arnold R. Hirsch and, particular to our church’s community, Jim Crow Nostalgia by Michelle R. Boyd. Gentrifiers by John Joe Schlichtman, Jason Patch, and Marc Lamont Hill is the best I’ve read on that impossibly complicated topic.

As always, not much fiction in my reading though one novel makes this list. There were some good memoirs – The Shepherd’s Life and H is for Hawk – and I’ve included the excellent new Dorothy Day biography here. I reread Day’s beautiful memoir during Lent and found it just as remarkable the second time.

The books on this thoroughly subjective list represent some of my more satisfying and eye-opening reading experiences this year. I hope one or two of them can provide you with similar moments.

Dorothy Day: The World Will Be Saved by Beauty by Kate Kennessy (2017)

Kate Hennessy is Dorthy Day’s granddaughter, the daughter of Day’s only child, Tamar. The biography she’s written capitalizes on her grandmother’s name to draw us in but ends up being much more than a portrait of the woman who founded the Catholic Worker Movement and wrote a still-popular spiritual biography. While the author covers this ground, her real interest lies in the relationship between the larger-than-life Day and the quiet daughter who grew up amid the chaos of her mother’s work and the eclectic social networks that formed around her. In many ways Tamar is Dorothy’s opposite and we sense how the affection they shared was also fragile, how the woman who communicated to the eager and idealistic masses found it a struggle to connect with her own daughter. For all of Day’s exceptional traits and experiences, she ends up being a pretty average parent.

I’m drawn to biographies, like this one, that manage to honor their subject without deifying them. Even better when the person’s faith is taken seriously and not explained away. Hennessy does both and much more and the result serves as a beautiful introduction to a woman many of us thought we already knew.

Shalom and the Community of Creation by Randy Woodley (2012)

Earlier this year a new friend recommended that I begin reading Randy Woodley, a Keetoowah Cherokee and professor of faith and culture. In Shalom Woodley offers a theology of creation and peace through an indigenous lens and his vision is fresh, compelling, and regularly convicting. While the book covers a lot of ground, the themes circle back to the pervasive significance of creation. Christian people, the author wants us to remember, cannot think about who we are apart from the world where God has placed us. He reminds us that, “Jesus, like so many in his day, was comfortable in a constant conversation with natural creation. He was not estranged from the creation in the way most of us in the western world our today.” In contrast, “the Euro-western mind” usually doesn’t see the creation as the start of “a continuous conversation with the Creator. The western view of creation has proven to be pitifully anthropocentric and utilitarian. Christianity has simply followed suit.” I’m afraid our current political moment has provided a large segment of American Christianity to confirm Woodley’s assessment which makes a book like this one even more essential. 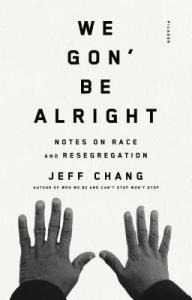 In this short collection of essays Chang has written a sharp critique of our times. He proves to be an especially astute observer to – and participant in – some of the more painful and culturally divisive moments of the past few years, including the protests in Ferguson. In that essay he avoids large-scale cultural criticism, instead choosing to hold our attention on Mike Brown’s lived experience in that Missouri suburb.

In “The In-Betweens” Chang writes about his experience of being Asian-American: “You went days and weeks feeling like you had never been seen. You were conspicuous and invisible at the same time.” From his lived reality in a country that reduces its racial insight to a blunt black-white binary, the author stakes out his own ground, and what he claims is essential to our times. In the same essay he writes about immigration: “‘Migration’ centers bodies. ‘Immigration’ centers bodies of law. The immigrant is therefore always troubled by questions of status: ‘legal’ or ‘illegal.’ When the immigrant is between the migrant and the citizen, their freedom – and others’ freedom, in turn – depends on the answer.”

Death Comes for the Archbishop by Willa Cather (1927)

This quiet novel is a sort of historical fiction. It’s two main characters, the first Roman Catholic archbishop of New Mexico and his close friend and vicar, are based on real men and other figures from history make occasional appearances. Cather imagined their lives through a series of roughly chronological vignettes; the narratives are generally contained to a chapter. Both men are generally portrayed sympathetically, including their expressions of faith. They’re imperfect and their humanity shows, but generally it seems the author wanted her readers to respect these two men of the cloth. And maybe it’s that I’m accustomed to literature in which the clergy is ignored, portrayed as out-of-touch, or assumed to have some devious motives or maybe its just that I’m a pastor looking for some role models, but it’s always satisfying to find a member of the clergy written as, you know, a person. (See also Marilynne Robinson’s Gilead, Home, and Lila.) But even if you’re not a pastor or don’t care much for pastors, Death Comes is worth the read, the perfect antidote to our loud and demeaning times.

The Half Has Never Been Told: Slavery and the Making of American Capitalism by Edward E. Baptist (2014)

One of the many strange things that surfaced this year was the many American citizens who hold romanticized views of the Civil War and the antebellum South. White nationalists have rallied around Confederate monuments, those same monuments have provoked fierce debate, and a candidate for the Senate suggested that life was better for everyone during slavery. This on top of the perennial argument that the Civil War was never actually about slavery but about states’ rights.

Though Baptist’s book was published a few years ago, reading it feels as though he anticipated this moment and replied with a devastating response. His thesis is simple: The financial rewards of American capitalism (in the south and the north) never would have been possible without the free labor extracted from kidnapped and enslaved Africans. Slavery, the author claims, was not on an inevitable decline in the face of northern industrialism; it was the foundation of industry and the appetite for more agricultural land and enslaved bodies showed no signs of abetting before the war.

The books does many things well, but two are worth highlighting. First, the author blends loads of data about the spread of slavery and its economic benefits to the nation with intimate narratives about those whose terrorized labor remains this nation’s great shame. Second, Baptist always focuses on the experience of those who were enslaved. His stories include names and histories as well as the visceral sense of survival under the harshest circumstances. The resilience and resistance of the women and men who are centered in Baptist’s narrative deserve to be told of again and again.