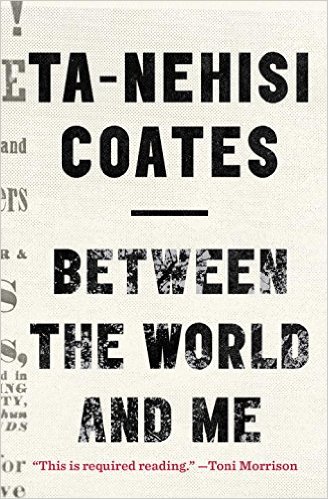 Ta-Nehisi Coates has written a book that is beautiful, tender, and painful. Readers will wince for reasons that will depend on how they’ve experienced this country’s obsession with race. Between the World and Me ought to solidify Coates’ as our generation’s James Baldwin, something I’ve been saying for a couple of years though that comparison is way more credible coming from Toni Morrison. The book comes out tomorrow and there are already many thoughtful reviews; don’t be fooled by how many of them are glowing, bordering on fawning. Critical hyperbole aside, it’s simply a book that deserves many reflective readers.

One of the interesting things about Coates is his complete lack of religious faith. He was raised outside any faith tradition; Afrocentrism was the closest thing to religion given to him by his family. In this way he differs from Baldwin who grew up with a mean preacher as a father and who could engage with Christianity and its racist American expressions from firsthand experience, if from an agnostic’s distance. Because Coates writes comfortably within his atheistic vantage point there are natural points of reasonable confusion when he considers Christianity. Take, for example, his reaction in New York Magazine to the public offers of forgiveness offered by members of the murdered church members in Charleston to their loved ones’ killer. “Even the public forgiving, so soon after the slaughter, seemed unreal. ‘Is that real? Coates said, watching the service. ‘I question the realness of that.’”

Coates’ question about the authenticity of this forgiveness is understandable and he seems to wonder about it sympathetically. He’s not angry at these grieving families, just confused about their motives and intentions. In the same interview the author contrasts President Obama’s eulogy for Rev. Clementa Pinckney and its push toward grace with Coates’ own, less hopeful, outlook.

Coates’s writing takes an almost opposite position: that religion is blindness, and that if you strip away the talk of hope and dreams and faith and progress, what you see are enduring structures of white supremacy and no great reason to conclude that the future will be better than the past.

Here Coates begins to sound very much like Baldwin, whose fatigue with American Christianity was on full display in his 1962 New Yorker article, “Letter from a Region of my Mind.”

Thus, in the realm of morals the role of Christianity has been, at best, ambivalent. Even leaving out of account the remarkable arrogance that assumed that the ways and morals of others were inferior to those of Christians, and that they therefore had every right, and could use any means, to change them, the collision between cultures—and the schizophrenia in the mind of Christendom—had rendered the domain of morals as chartless as the sea once was, and as treacherous as the sea still is. It is not too much to say that whoever wishes to become a truly moral human being (and let us not ask whether or not this is possible; I think we must believe that it is possible) must first divorce himself from all the prohibitions, crimes, and hypocrisies of the Christian church. If the concept of God has any validity or any use, it can only be to make us larger, freer, and more loving. If God cannot do this, then it is time we got rid of Him.

The confusion and disinterest Coates’ shows toward religion generally and Christianity particularly can be chalked up to his distance from it, though I imagine he’s had more than enough exposure to America’s versions of Christianity. Baldwin is harder for Christians to explain away because his knowledge was personal. He wrote with an insider’s knowledge and what he’d seen wasn’t pretty.

There are many reasons to read Between the World and Me and probably even more to dig deeply into the Baldwin canon. But for Christians of all races these authors need to be listened to especially closely for the precise ways they reveal our deficiencies. What sort of deficiencies? Broadly speaking we might read these non-believing prophets for their ability to spot our hypocrisy. But we already expect this, don’t we? Perhaps more helpfully is how Baldwin and Coates reveal the weakness of our supposedly supernatural faith. Forgiveness and hope are central to Christian faith- there is no Christianity without divine forgiveness and eschatological hope. Yet for Coates, and undoubtedly many, many others, the beliefs that appear so radically central within Christianity have been displayed to those outside the Faith as little more than coping mechanisms, excuses to avoid dealing with the real world.

So which are they? Life-altering beliefs about the universe and its Lord or spiritual distractions to make a difficult life slightly more tolerable?

Christians, most of us anyway, want to believe the former but Coates and Baldwin won’t let us off so easily. I’m thankful for this. Their criticism is an invitation to a faith that is deeper and more true than what has often been expressed in this christianized and racialized country.